Nepal, a predominantly Hindu and Buddhist nation, is gifted with assorted festivals which mostly takes place during post-monsoon season. Thanks to the indigenous cultures and inhabitants residing the greater northern region of Indian subcontinent, there is always something interesting to observe in Nepal.

With an area of 56,827 sq. mi and a population of approx. 27 million, Nepal is the 41st most populous country in the world. Moreover, what makes it distinct from other nations is its richness in cultures and festivities.

The demon dance of Majipā Lākhey is performed on the streets and market squares. The Majipa Lakhey dancer and his retinue of musicians move aimlessly through the streets spreading the festive mood.

The Hindu culture is known to be most vibrant and colorful in the world. The celebration of any important event is carried out with huge feasting; when in such occasions the crowd comes alive with dancing and singing. A foreigner experiencing such events first-hand may find it overwhelming and very special. Sometimes, the rituals and ceremonies can leave you awe-struck!

Folklore and festivities are the integral part of Nepalese society.

List of major festivals celebrated throughout Nepal during Post-monsoon

Dashain is considered the biggest and holiest festival by Hindus and Buddhists alike, and is widely celebrated in Nepal and India. Taking place during October, it’s celebrated for 10 consecutive days. Sacrifices of Goats, Buffalo and other animals are widely offered to please deities.

The initial celebration started during the medieval time. According to legend, it all started when Goddess Durga destroyed the evil lord, bringing prosperity and happiness in the world it, therefore, ‘Kal Ratri’ is highly regarded during Dashain. Feasting with families is carried out for days. Young members of the family take blessings from the elders. Flying Kites covering the sky, is a common sighting during Dashain.

Imagery of Goddess Durga -“One who killed the Evil lord..” 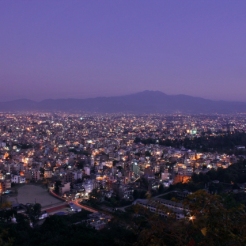 Kathmandu is bright lit during Tihar.

Rangoli or decorating floor with colors is popular during Tihar

Yenya is the biggest street festival in Nepal. This celebration consists of two festivities, Indra Jatra and Kumari Jatra. Held according to lunar calender, the day may differ every year (taking place in the month of September). 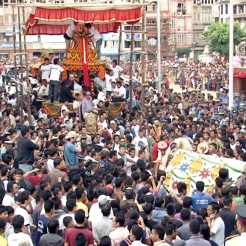 Chariot of Kumari, a living goddess, is taken throughout Kathmandu city

Kumari, the living goddess, is escorted throughout the city of Kathmandu during Kumari Jatra.

The demon dance of Majipā Lākhey is performed on the streets and market squares. The Majipa Lakhey dancer and his retinue of musicians move aimlessly through the streets spreading the festive mood.

The days of fasting and feasting is widely celebrated on the month of August/September. Popularly known as Teej, it tends to last for 3 pious days. It marks the communion of Goddess Parvati and  Shiva –One of Hindu Trinity.

..is widely sang by women in this day.

Married women, for sake of their husband’s life and health, fast entire day for 3 days along with visiting temples for blessings. It is widely celebrated by organizing feasting by and for women. They are seen clothed in Red Sari, as Red is considered auspicious. Even, Indian women celebrate this homogeneous occasion widely.

The occasion starts from the time they eat a last meal prior fasting, popularly known as “Dar khane Din.” 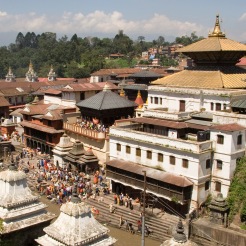 Women celebrate Teej with dancing on the tunes of folklore. 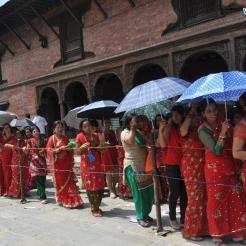 Women are lined-up in Pashupatinath to offer Puja

7 thoughts on “What are the major Festivals Celebrated throughout Nepal??”